So you are really reading this. Ok well I will do my best to make it interesting and brief...
Here's what happened... 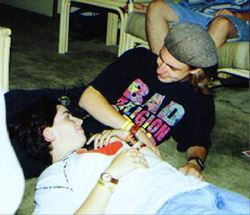 On May 10th 1997, Lisa Marie Alderman was turning 18. One of her best friends in the whole wide world decided that he would throw her a birthday party. Not just any party mind you, oh no, one with a cover charge, because he had to pay the rent somehow, right? So another one of Lisa's good friends came, and brought with him one of his friends. That would have been Matt Milson, bringing Eric Scott Kramer. The party was great; everyone one had a good time, and the guy that threw that party had rent money. Good deal. The future was set in motion.

That summer Lisa and Eric got to be the best of friends and more. On August 13th they started dating. Eric finished up his senior year at Covington Catholic, and Lisa went off to her freshman year of college at College of Mount Saint Joseph in Cincinnati. After a year of dating they both learned that they were going away to school at the same place. University of Louisville, here we come! Lisa was a sophomore and eager to leave home. Eric would be a freshman on a great scholarship… 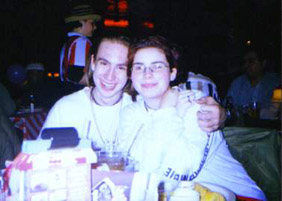 So to Louisville they went. Both lived on campus and life was good. Both decided that they hated living on campus and moved off. After two years of going to school and being together as much as possible, the Third anniversary rolled around. Eric planned a big night out for both, and knew that he would propose that night. So they went out to dinner at the Spaghetti Factory, and went for a romantic horse drawn carriage ride, and then headed back to Lisa's apartment. When they got there, Eric got down on one knee and proposed. And of course, you know that she said yes. It seems that while the couple was out to dinner, some of Eric's friends had been in Lisa's apartment. They had lit candles and spread rose petals out everywhere. It could not have been more perfect.

Now that you have said, oh how sweet, let us move on. Eric and Lisa were not finished with school, and knew that they would not be done any time real soon. So they waited and did not set a wedding date…. A year and a half went by, and by then the end was in sight. So they set a date. August 9th 2003 would be the day. And so Lisa planned, and planned and planned. 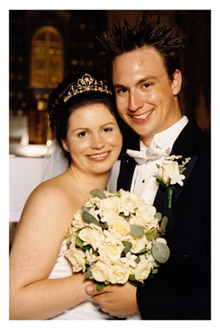 The big day finally came and they were married at Blessed Sacrament Catholic Church in Fort Mitchell, Kentucky. The reception was at the Madison. Everything was beautiful and perfect. Why I am telling you this, I am not sure, because I'm sure you were there. And if for some reason you were not there, you can just check out all 600+ pictures that are here on the website. Happy day! Well of course, you have to go on a great honeymoon after you have been engaged for three years. So off they went to Disney World! A wonderful seven days of paradise awaited them. And those pictures are here also, for your viewing pleasure.

And then they came home. And what in the whole wide world could be interesting about home, once you have gotten married to the love of your life and been in Disney world for 7 days? Well there is only one answer to that question, and I have it. Coming home to your brand new, built just for you, just moved into home! While planning a wedding and working and doing all kinds of other things, Eric and Lisa had decided it was a good idea to build a new home. They had picked out the lot and the house back in December of 2002. And ground was broken for this great adventure on January 5th 2003. They had officially moved into the house in June of 2003, but had not had the chance to make it their own yet. And so they came home to much unpacking, painting and wall papering, and grass cutting and all the other joys of being new homeowners. 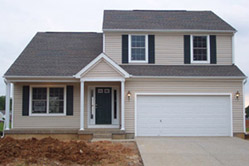 And they settled in. Just like that. They had been to school, gotten married and built a house. And they had been together for six years already. Can you believe it? It seemed amazing to them too. Of course there had been ups and downs, just like everyone has. And there still are ups and downs, and always will be. But right now, as I write this they have been married for one year and seven months. I will not try to figure the hours and minutes for you. But they are happy, and they are planning for the next big adventure, whatever that may be.

And I would be neglecting the other members of the household, if I did not include them. They live in that house and share the daily life of Eric and Lisa, and make sure that no one ever comes home to an empty house. Those family members are in order of seniority, Marf, Peeka, Gizmo, Oi and Reese. And many great pictures of them can be found on this website also. They each have their own personality, and each of them has good days and bad, but I will not bore you with these things, instead I will encourage you that has taken the time to read this story, to come over to the house sometime and visit with everyone.

EXTRA, EXTRA, READ ALL ABOUT IT!! 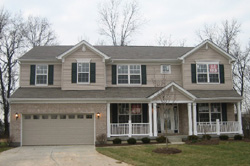 Eric and Lisa and all the kitties decided to relocate to Northern Kentucky. Decemeber 15th, 2006, they closed on their brand new house in Independence. 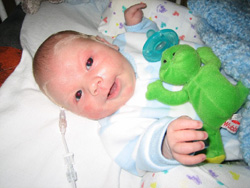 January 24th, 2008 at 5:24 PM, Tyler Lucian Kramer was born. Tyler came into the world weighting 7 lbs. 11 oz. He was 19 inches long. Tyler wanted to be an extraordinary baby right from the start, so rather than do things the normal way, he was born with Gastroschisis. That means that his intestine was exposed through a hernia in his abdomen. Ty spent 5 weeks in the NICU at Children's Hospital before coming home. He had surgery when he was seven days old to place his intestines back where they belong. 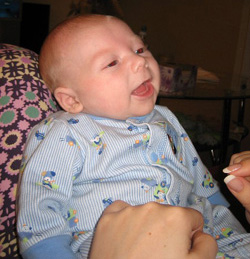 Ty is home and doing very well. He has adjusted to his 5 furry siblings and everyone is a big happy family now!

Please come and see us, we'd love to tell you more.